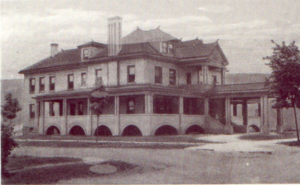 Children’s Aid Society was organized in October 1890 as the first child welfare agency in Clearfield County. The Society was created to place children in carefully selected suitable homes and prevent these orphaned children from spending their young lives in the Poor House. Visiting homes throughout the county was challenging in horse and buggy days, especially in bad weather. As the number of children increased, a Children’s Home seemed to be the best solution.

In 1915, the Society rented a small house on Spruce Street and equipped it to house 10-20 children with Mrs. Kelso as matron. The small house was soon outgrown. In 1917, benefactors Asbury W. Lee and John Wrigley anonymously built the Children’s Home for the Society. The Home was called the Mystery House while being constructed, as no one knew the builders or its purpose. The building was presented to the Society in July 1918 with the stipulation that it always serve children, and it was named the Children’s Home.

The first use of the building was as an emergency hospital in 1918 during a flu epidemic of several months (at the request of the Board of Health.) The first regular residents of the Children’s Home moved in during May 1919 with Miss Grace Hoyt and later Miss Mary Pope as matrons. 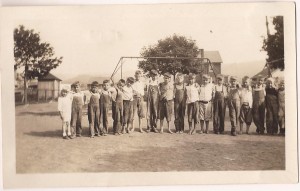 An undated, historical photo of children in the Children’s Aid Society playground.

Several auxiliaries of Children’s Aid Society were organized in Ansonville, Clearfield, Coalport, Curwensville, DuBois, Kermorr, Mahaffey, Osceola, Smith Mills, and Winburne. The auxiliaries were helpful in fundraising, investigating homes, and visiting and keeping in touch with children placed in their communities. Finances were always challenging. Tag days, special drives, and bequests brought in help as needed to purchase bonds. In the early 1950’s, the last of the bonds had been sold and the agency bank balance was down to $75. The public was notified, and with no organized solicitation, $7500 was raised.

The Home often had forty or more children in residence and 20 or more in foster or adoptive homes. There were many adoptions over the years. Boys were often placed in Girard College or Hershey School, and many girls were placed in Carson College or the Indiana Industrial School for Girls. Countless children spent their vacations at the Children’s Home. In the first 50 years, approximately 1140 children were under the Society’s care.

By 1979, the agency recognized the need to provide smaller bedrooms and to keep the boys on the 2nd floor, and add a 3rd floor for the girls. This major project was completed in 1980. Shortly afterwards, there was a national movement to move children from orphanages to foster homes, and by 1983, the children in the home had been moved to other homes. (The agency built a small residence for special needs children, which was later taken on by Goodwill, then bought by Bethphage.)

Changing With the Times

The board of directors faced the challenging decision of whether or not to dissolve Children’s Aid Society. We are grateful that they had the courage and foresight to continue. Naturally, the first interest was to become a formal Adoption Agency and help find loving families for children in need. The first “official” adoption happened in 1986. Currently the agency provides services for children and families throughout central Pennsylvania for private, special needs, and international adoption.

In 1986, the agency was approached by Partners With Youth of DuBois and asked to assume the program. They converted it to Big Brothers Big Sisters in 1991, and added School-Based Mentoring since then.

A large renovation project in 2001 was designed to make the former Children’s Home building work more functionally as a Child Care Center. Each classroom was given more space, more storage, and an adjoining bathroom for the children’s use. The plumbing, heating, wiring, air conditioning, and sprinkler system were extensively upgraded to bring the building to current codes and standards. The walls were re-painted, new flooring was installed, and the former children’s closets were removed. The kitchen and pantry areas were modernized.

During the latest renovation project, it was noted that the workmanship was exemplary – the building was constructed to last a long time. The exterior walls are three bricks thick. Interior walls in the hallways were two bricks thick, covered with plaster. When removing very heavy fireplace inserts, workers found extensive support in the basement to hold the weight.

In 2010, the agency celebrated its 120th anniversary. With the help of dedicated volunteers, they repainted the entire interior, decorated the walls with flowers, and added a mural to the stairwell. The building was renamed as a Child Care & Early Learning Center due participation in Keystone STARS, a state quality initiative, curriculum-based child care, and a Pennsylvania Pre-K Counts classroom.

Over the past two decades, they have added formal Foster Care Services to the list of offerings as well as a wide array of parenting and relationship education classes to help strengthen families.

In 2017, the agency purchased an adjacent property at 223 Virginia Street and renovated it into office space to house its growing needs.

We are grateful to the long line of board members and staff for the love, care, and commitment they have shown to children and families for 127 years. The community has been supportive, as has the United Way and the Clearfield County Charitable Foundation. It is our hope and intention that we can continue to provide quality services for children and their families for the next 127 years! 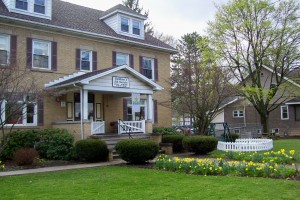 The current Child Care and Early Learning Center (the original Children’s Home), at left,
with the administration building pictured at right.